If you want to switch off from the world without giving up on life's comforts and luxuries, there are few more out-of-the-way, or better equipped, boltholes than Tigh Ruaraidh.

Tigh Ruaraidh is just one of three homes in Lonbain, a small township just off the remote and rugged north coast road of the Applecross Peninsula in the Scottish Highlands. Inverness, the capital of the Highlands, is approximately 80 miles to the east.

Lonbain is seven miles north of Applecross village off the coast road. Tigh Ruaraidh sits in its own grounds above the dramatic rocky coastline, and is approached via a gated track some 200m in length. There is ample parking space by the house.

Much of the attraction of Applecross lies in its remoteness. The peninsula lies in the old county of Wester Ross and projects westwards from the Scottish mainland toward the Isles of Raasay, Rona and Skye, shaped like a west-facing axe blade with its neck formed by the single track A896 which runs from Shieldaig in the north to Loch Kishorn in the south. Using this road it is possible for anyone exploring the west coast to bypass Applecross altogether; but anyone who does so has missed some of the best scenery in Scotland.

Until 1976 the only way in to Applecross was to drive over the spectacular Bealach na Bà (Pass of the Cattle) from Loch Kishorn. This is still regarded by many (including the owner's family) as the 'traditional' way to approach Applecross.

The Bealach rises to a height of 2053 feet from sea level over a distance of five miles before descending again to sea level, and is the highest road pass in Scotland. The road also provides some of the most challenging driving in the country with steep inclines and hairpin bends. It is single track throughout and the warning signs at its foot, including one deterring learner drivers and caravans, should be taken seriously. Another warns that the road is often closed in wintry conditions. Fortunately there is a low-level coastal road between Shieldaig and Applecross constructed in 1976 and which remains open throughout the year. 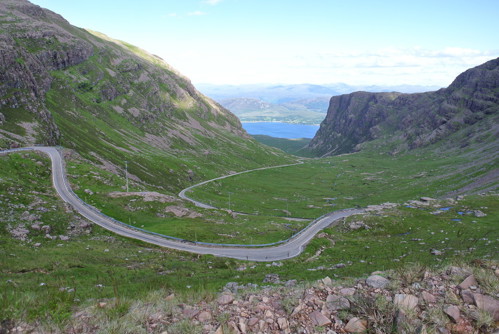 As you climb to the head of the Bealach na Bà, a series of hairpin bends which feel more alpine than Scottish, take you to the summit. From here on a clear day, uninterrupted views across the Inner Sound can only be described as 'magnificent' with the isles of Raasay, Rona, Skye, Rhum and the Outer Hebrides being visible.

Our second time at Tigh Ruaraidh and still think it's the most magical and beautiful place ever.
Lynn & Barry, Lancashire